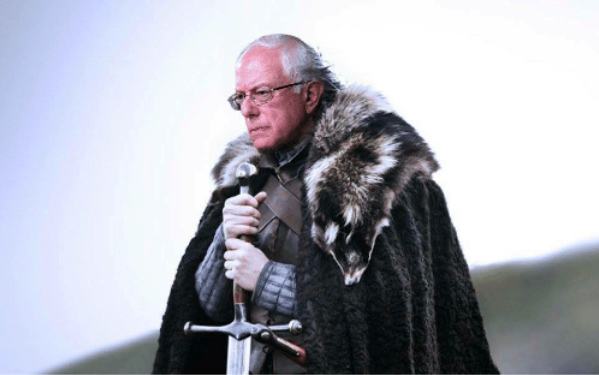 Winter Is Coming. Bernie’s Campaign is the Most Resilient and Battle-Ready.

It was April, year of our Lord 2019. Spring had sprung. The birds were chirpin’, and the bees were buzzin’, and Joe Biden had just launched his presidential campaign. His announcement video was lauded by the mainstream press as he called for a restoration of the soul of America and assured the good people of this ultimately still-great country that the election of Donald Trump in 2016 was but an aberration, and that order would soon be restored, and that we’d undergo no final, irreversible fall from grace.

Then, he opened his mouth on live television during the first Democratic debate in June, and, well, it’s sorta been all downhill for him from there.

But by then, the media had found its new hero. The senior Senator from the Commonwealth of Massachusetts via Harvard University, a Cherokee princess by the name of Elizabeth Warren, had begun publishing a series of blog posts on Medium.com. But these were no ordinary blog posts. These were plans. Plans for everything. Every social malady, every economic inequity, every historical wrong that needed righting – she had a plan for it. And as the sun warmed the oceans of the earth over a long, hot summer, Elizabeth Warren’s plans illuminated the minds of the Democratic primary electorate. She skyrocketed in the polls, and had the betting markets convinced that she, not Joe Biden, would be the one to wrest the iron throne from Donald Trump in November of 2020.

But then, in a horrific and unexpected turn of events, she was asked a somewhat difficult question on that same debate stage in mid October about how exactly she would finance one of her aforementioned plans which she hadn’t yet blogged about: Medicare for All. Would she raise taxes on the middle class? She couldn’t say. The team of moderators, led by Anderson Cooper, $11 million-a-year newsman, Vanderbilt heir, and watchdog for the American proletariat, prodded her on this question over and over again, but could elicit no clear response. For the first time on the debate stage, she had appeared evasive and unprepared. And, upon scrutiny of such performance, her momentum was quickly blunted.

By now, a brisk, autumnal chill had fallen upon the American landscape. The leaves were beginning to brown, and as they fell down to earth, so did Elizabeth “Talks In Circles” Warren’s electoral prospects. Who, as the air grew colder and the skies grew grayer, would emerge as the harvest season’s media darling? Enter Pete Buttigieg. For in that same debate in which Warren had faltered, he had changed his demeanor from affable, benign, “pragmatic progressive” small town mayor, to stern, no nonsense, centrist combat veteran who wasn’t going to stand for any of Pocahontas’ bullshit.

And as we speak, just past the peak of foliage season, the mainstream media is swooning over their new knight in shining armor, Mayor Pete. Of course, he’s polling in the low single digits among African American voters, and so, like the pumpkin spiced lattes and Oktoberfest beers the season is known for, his shelf life as a novel commodity will undoubtedly be quite short.

While all of this was happening, however, Vermont Senator Bernie Sanders had been criss-crossing the country building a multi-racial working class movement of ordinary people, rallying them around a platform of social, racial, economic, and environmental justice. None of those things ever seem to excite the press very much though, and so his efforts went largely unnoticed. Whenever his campaign was mentioned, it was often done so dismissively, many times even with the suggestion that he give up altogether and drop out of the race. In early October, he suffered a heart attack which landed him in the hospital, at which point his media detractors thought that he was surely done for.

While recovering in his hospital room, however, he received a phone call from Alexandria Ocasio-Cortez, a former bartender from the Bronx who had been inspired to run for office by Bernie’s underdog grassroots 2016 campaign, and who had won the most shocking upset victory in a generation to become the new Congresswoman from New York’s 14th Congressional district. She informed him that in a “moment of clarity,” as she described it, she had decided to endorse him for president and join his campaign. He teased this endorsement at the October debate a couple weeks later, and that following Saturday, returned to the campaign trail with AOC’s support and the largest crowd of any political rally this cycle by any candidate.

Since then, things have been looking up for Bernie and his newly revitalized campaign. As of this writing, he’s polling right near the top of the pack in national polls as well as in the critical early states. And unlike his competitors, who have all undergone honeymoon periods with the press, Bernie has persevered through this campaign and achieved top-tier status despite his age, his health scare, and, most importantly, media coverage that has ranged from non-existent to overtly hostile.

Biden, Warren, and Buttigieg have all been able to successfully ride the waves of fawning media praise they’ve each received during various stretches of this still young 2020 cycle. They also seem to have struggled to maintain momentum once that media coverage either lessens or turns for the worse. Bernie, on the other hand, has never enjoyed the privilege of great publicity, and likely never will. Even now, as he rises in the polls, the cable TV talking heads are still panicking over what his supporters may or may not do when they predict he inevitably loses the nomination. The fact that he’s doing as well as he is isn’t merely a testament to his campaign’s strength thus far, but a sign of its resiliency moving forward into the all-important winter months.

It’s this winter when his campaign surrogates will mobilize on his behalf (AOC is going to Iowa this week, in fact). It’s then that his one million-plus volunteer army will get to truly flex their might (they’ve already made well over a million phone calls). It’s then that his million-plus individual donors will matter most (the campaign has budgeted for $30 million in ad spending for the early state contests). It’s then then the American people get serious about this primary fight, and the Sanders campaign is ready for battle. His opponents have shown certain strengths, no doubt, but they’ve also shown to be glass-jawed paper tigers when met with any real pushback. All the Bernie campaign ever gets is pushback. They know they can handle it, and handle it they will.

And so Biden had the spring, Warren the summer, and Mayor Pete is basking in the hoodie weather at the moment. But there’s still one season left to go before this race kicks into gear. Brace yourselves – or should I say, Bern yourselves – winter is coming.