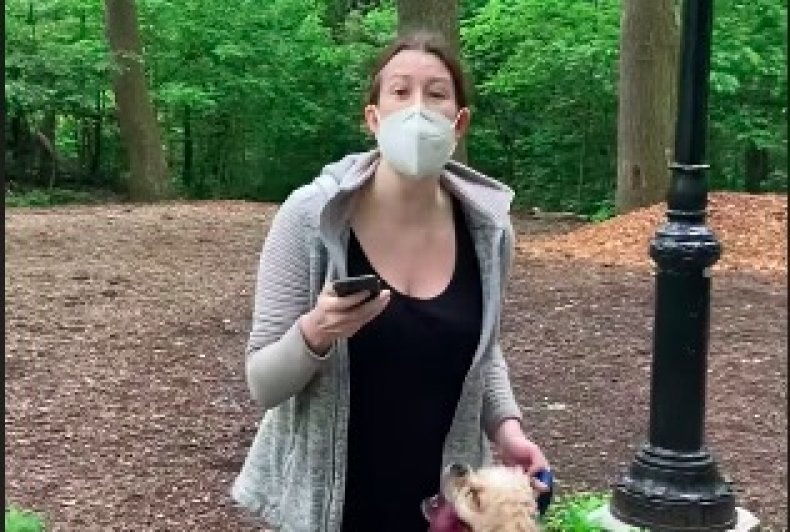 “I’m going to tell them there’s an African American man threatening my life,” said Amy Cooper, as she took out her phone to call the police on Christian Cooper (no relation), a black man who asked her to leash her dog in accordance with the rules of Central Park’s “Ramble,” where their paths happened to cross early Monday morning. She made sure to mention his race again to the police once she got them on the phone, only this time, in a strained, high-pitched tone of voice she employed to make herself sound distressed, or even endangered by Christian, the benign birdwatcher who was calmly documenting this entire exchange on video. She told the police, “There is a man, African American, he has a bicycle helmet and he is recording me and threatening me and my dog!”

Later that day, Christian’s sister, Melody, shared the video on her Twitter account, where, at this writing, it’s been viewed approximately 36 million times. Some were quick to assume that Amy was a Trump supporter who had been empowered by the president’s own bigoted rhetoric to “crawl out from under the rocks” and show her true racist colors, even in the deep blue heart of New York City. Others were quick to point out that, in fact, Amy Cooper is a liberal Democrat, who, according to public campaign contribution records, donated to Pete Buttigieg’s 2020 presidential campaign, and that racism often transcends political ideology, or at least political affiliation. But a closer look at Amy Cooper, and what she represents, paints a grim picture not just of American politics, but of the meritocratic ideal upon which all of American politics is predicated.

Consider where this episode took place: in the Ramble region of Central Park. The Ramble is a wooded section of the park that occupies about 38 acres of land between 73rd and 78th streets, nestled between two zip codes whose median incomes are well over $100,000 per year.

Consider what Amy Cooper did for a living, before being fired over the incident: she was a “head of insurance portfolio management” at an investment firm called Franklin Templeton. She has over 500 “connections” on her LinkedIn profile, according to which, she “leads the insurance portfolio management and strategy business at Franklin Templeton. She has dedicated her career to delivering and executing investment solutions for insurance and pension companies globally. … She is a recognized industry leader in insurance accounting and regulatory issues, asset liability management and strategic asset allocation. She has worked in a variety of insurance focused roles.”

Consider where she used to work: Citi, Lehman Brothers, and Willis Towers Watson.

Consider where she went to school: the Booth School of Business at the University of Chicago, where she got her MBA in analytical finance.

In other words, consider this: Amy Cooper is the ultimate meritocrat. She did everything exactly as she was supposed to. She went to school, she built her resume, she amassed a portfolio of business contacts, and she landed a lucrative job at a multi-billion dollar asset management company on Park Avenue. To paraphrase Barack Obama, whose campaigns Cooper has also donated to, she “worked hard, played by the rules, and got ahead.”

And because she so successfully climbed the ladder of American meritocracy, she had the morning off on Monday, a national holiday, to walk her dog through Central Park. You see, on a normal business day, she couldn’t do this. She’d have to go in to the office and work her analytical magic to earn her big paycheck to pay for her nice apartment and her Mayor Pete donations. During this time, one of her hired dog-walkers would be tasked with walking and cleaning up after her Cocker Spaniel.

In fact, it was two of Amy’s former dog-walkers, Kyle Stover and Lindsey Cork, who outed her identity after seeing the viral video. Kyle and Lindsey are 30 and 31, respectively, about 10 years younger than Amy, and neither of them work at Lehman Brothers. I’m not even sure if they have LinkedIn profiles. But I’d bet my bottom dollar that neither of them live in Amy’s neighborhood. They surely had to slum it on the subway from whichever lesser zip code they lived in for at least a good half an hour to 45 minutes in order to walk Amy’s dog, for, I would guess, maybe $12/hr (that was about the going rate for a dog-walker when I lived in Brooklyn just a few short years ago, and yes, I checked). See, neither Kyle nor Lindsey ascended to Amy’s place in society. I guess they just hadn’t worked hard enough; they hadn’t “earned” the life that Amy had. I mean, come on, they were “just dog-walkers.”

Funny, then, how the lowly, less “worthy,” less “deserving” of a dignified life according to the meritocratic ethic, dog-walkers, are some of the heroes of this story. Cork, whose boyfriend is a black man, said to the New York Daily News, “If I know a person doing this, and I can identify them, I’m not going to just be quiet. I can’t. It’s against any kind of ethics I have.”

Stover said, when interviewed about the matter, “We’ve seen so many videos of people being shot or killed for less, and that’s terrifying, and like she either doesn’t understand the weight of her actions or words or she does, both of which are terrible.”

So in this case, it was those without the impressive resumes or the fancy zip codes or the Park Avenue offices who blew the whistle on this professional, highly educated, highly skilled cretin who, until yesterday, was enjoying the life she had “built for herself” through years of “hard work,” “perseverance,” and “determination.”

In case my use of quotation marks doesn’t sufficiently signal my ironic use of those terms, I’ll refer you to a quote from George Carlin in one of his later stand-up specials. He said this in reference to the American political class, but I would argue this would apply to the professional managerial class (sometimes known as the “wine-track” folks in modern political jargon) more broadly:

“Where do people think these politicians come from? They don’t fall out of the sky. They don’t pass through a membrane from another reality. They come from American parents and American families, American homes, American schools, American churches, American businesses and American universities, and they are elected by American citizens. This is the best we can do folks. This is what we have to offer. It’s what our system produces: Garbage in, garbage out.”

Indeed. Garbage in, garbage out.

Despite many people’s knee-jerk reactions to this story which led them to believe Amy Cooper was your typical white trash deplorable from MAGA-ville, I can honestly say I had her pegged from the second I saw the video.

Was I surprised to learn she had a higher degree from a great school? No.

Was I surprised to learn she had an impressive resume? No.

Or an extensive professional network? No.

Was I surprised to learn she had a high paying job in the financial services sector? No.

Was I surprised to learn she supported Pete Buttigieg? Fuck no.

Is this to say that all, or even most, people who achieve success in their lives, are morally inferior to those who don’t? Of course not. But the dominant attitude of our society for generations has been that the opposite is true; that success is borne of moral virtue, and that failure is borne of moral deficiency.

Furthermore, a cultural ethic which insists that dignity is not inherent in every human being, but rather, must be earned through a years-long process of schooling, training, networking, interviewing, and, finally, performing in a professional environment, is bound to commit the moral sin of elevating some of its shallowest, cruelest, and most craven members to positions of great power and influence, because those are the people most likely to conform to such an ethos without questioning it.

Run all this through the Rube Goldberg machine of American meritocracy, and what comes out of it? Amy Cooper.

It makes perfect sense. And it makes even more perfect sense that the dog-walkers were the ones who called her out in the name of justice. Because it stands to reason that those who don’t make it their life’s work to ascend the meritocratic ladder would be the ones to strive towards a different ideal. And so, as a society, the only way to weed out the Amy Coopers once and for all, is to join the dog-walkers, and smash the meritocracy.

Thank you for reading! You can help support our independent media project by making a secure donation via PayPal. Every little bit helps! Thank you so much for your support!

Listen to our latest podcast episode below:

**Follow us via email by entering your email address in the field on the sidebar (computer screen) or below (phone), and/or by liking/following us on Facebook and Twitter!**