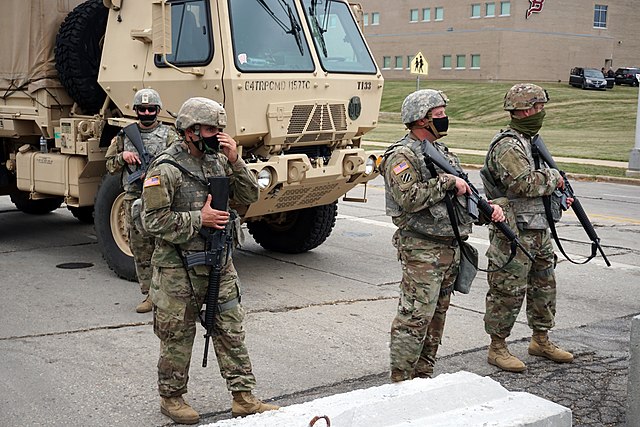 I know people are angry at this 17 year old kid, Kyle Rittenhouse. I get it. I am too. But please keep in mind, and in heart, he’s just a 17 year old boy. I was his age when the U.S. Army trained me to kill people – only 17 years old. I didn’t know anything. I believed in something that deceived me on purpose. I was manipulated, like Kyle was. I was Kyle. Kyle is me. Me: your beloved, loving friend, neighbor, caretaker, student, teacher, healer, spicy activist, brother, son.

I’m really glad that, during my time in service, I was never placed in a situation where I would’ve felt compelled to shoot a human, because I would have, without hesitation. I was a very good shot. I could’ve hit you if only the top half of your body was visible at 300 yards. If, by accident of birth, you were an Iraqi or an Afghani, and I were deployed in either of those wars, I very well may have shot you. You’d be dead. And I’d have been made to feel like a hero for killing you. How awful for both of us, our humanity. I’m not saying I have loads of sympathy for Kyle just for his sake. No way. He has a serious reckoning due, and a lot of unlearning of the shit that was put into his head by adults with an agenda. But I refuse to point my capacity for grief-laden anger-come-violence toward a 17 year old boy even when I know he killed my fellow unarmed protestors, my brothers, our brothers, in the absolutely necessary, realistic, difficult and tragically ongoing liberation of Black Lives.

I’m telling you all to dig deep. Empathize. Consider. Understand. Use the depth of your human capacity for love in this tragedy. I’m not asking you. This is not a fucking request. People are being killed. Askin’ time is done. This an order from a veteran who looks back at his younger self and sees someone akin to Kyle Rittenhouse; a veteran who sees his 42-year-old self trying to get through to Kyle before he went there; a veteran who sees himself failing to disarm Kyle in slow motion, who feels my soul yelling Noooooooo! through tear-filled eyes as Kyle killed our brothers in their quest for justice.

Be the change Anthony Huber died for; the change he gave his life to see. Do not let his death be in vain. Direct your righteous anger where it should be: at the cops, at the institution of the police. Be angry at the adult cops for literally driving unarmed, young protestors toward a 17 year old kid weaponized not just with his AR-15, but with a police mentality; a mentality reinforced with the authority to act with impunity . Ask yourself who and what turned 17 year old Kyle into a deadly weapon.

Then act accordingly, when it comes to your municipality’s, your county’s, your state’s, and your country’s police/military budgets. Dismantle the vicious self-serving power structure that pitted young Kyle and his pals against young Anthony and his pals. Destroy it. For all our sakes.

Defy and destroy the system that killed him because it’s getting set to kill more of us. White supremacism has tools. Dismantling institutionalized white supremacism means taking away its tools. Look at how the police treated this scenario. Who turned a 17 year old boy into a murderer? Cops. There’s enough evidence now to show that police will continue to enforce white supremacism because it financially benefits them to do so.

If lousy politicians or administrators get in your way or make excuses, then organize against them and vote them out. If replacing them takes too long, protest them wherever they are, all day and night. Protest the police too. Schedule these non-violent actions with your community. No Justice, No Peace. Anthony Huber deserves that much from us.

Also, in order to carry out Anthony’s vision, we do not need to fully rely on politicians and their “economic investment” by way of capitalism to dismantle the oppressor system. In fact, that isn’t logical. We must build community based alternatives to policing so that policing becomes irrelevant. This is paramount. Alternatives to the police include: block associations; education and training of community members in domestic de-escalation tactics; Elephant Councils that act as direct arbiters instead of the terrible court and jail based legal system (it is not a “justice system” and it never was); restorative/transformative justice work; mutual aid; spirituality; radical compassion; public banking, Medicare For All, etc.

The world – according to the corrupt “rule of law,” according to the rules set forth by white men and others who’ve sought power and dominion of opinion over other people for well over 500 years – is now a place where Kyle Rittenhouse killed Anthony Huber. What are you going to do about that world? You have all the power in that world.

I am mostly space; what stuff I am can fit on the head of a pin. Yet that stuff is from stars. View all posts by richierose1221