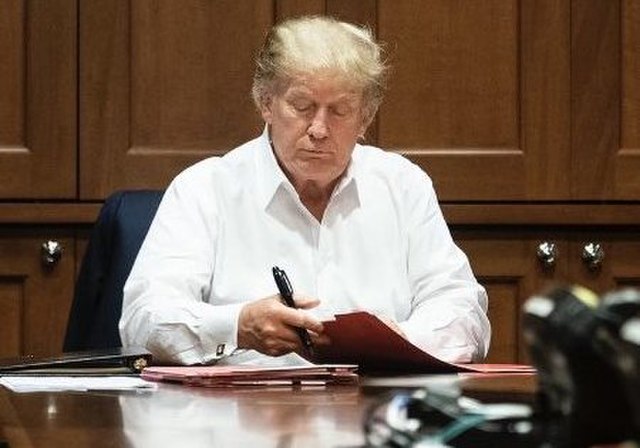 I am, and have been for some time, what many would call a “conspiracy theorist.” In a friendly game of Zoom trivia a couple of weeks back, there was an “assassinations” category, and I found myself blanking on obvious answers like Lee Harvey Oswald and James Earl Ray – that’s how skeptical I tend to be of mainstream narratives. Given my tendency to doubt the official stories that come out of our government and media, I feel that if I’m convinced that Donald Trump actually has COVID-19, you ought to be as well.

Of course, Trump is a habitual, reflexive, and sociopathic liar, who no doubt would consider faking this diagnosis if he thought it could somehow be a boon to his struggling re-election campaign. But testing positive and being hospitalized for the disease he’s spent the past seven months downplaying at every opportunity is not exactly the political game-changer he needed. For the first time in this election cycle, I feel confident in predicting that Trump will lose.

Some on the Left, including most notably Michael Moore, have been suggesting that this might be some perverse October surprise on the part of the Trump campaign, whereby they are either faking the diagnosis altogether, or have concocted some evil genius plan to spin this episode in the president’s favor in the final weeks of the campaign. Despite my aforementioned tendencies to at least entertain, if not fully embrace, such theories, and my soft spot for those who hold them, I don’t think there’s any reason to believe them this time around. There are a number of reasons to believe that Trump does have coronavirus, cannot spin this to his political advantage, and will lose in November.

There is No “Sympathy Vote”

One theory for why Trump may be lying about having the virus, or why he might think a positive diagnosis could benefit him politically, is that by falling ill, he will garner the sympathy of the American people. What this theory fails to consider is…well…everything. Donald Trump – the man – is uniquely loathed by Democrats, Independents, and yes, even some Republicans, alike. Dismiss this as anecdotal evidence if you want, but I’ve spoken to several Trump supporters who have told me in private that they think he’s a “jackass,” “jerk off,” “idiot,” “lunatic,” who they wish “would just keep his mouth shut.” He’s a remarkably unsympathetic figure, whose own base signals their lack of personal affection for him, or anyone else, for that matter, by sporting fan-made swag with unofficial Trump 2020 slogans like “Fuck Your Feelings” and “No More Bullshit.” Their support for him politically is actually predicated upon what an utter asshole he is as a human being. Add this to the fact that Trump had been callously downplaying the seriousness of the coronavirus as bodies piled up in refrigerated trucks throughout New York City and elsewhere, and the idea that there’s a sleeping giant of “sympathy votes” that will be awakened by this news is actually pretty ludicrous.

The “Miracle Cure” Angle is a Dead End

Another theory is that Trump will claim to have been cured by some new, experimental treatment (which he has received, according to some reports), and that this would be the kind of vaccine-like medical breakthrough against COVID-19 that could seal the election for him. No offense to anyone, but this is the kind of conspiracy theory that could only be conjured up by rookies in the field. No seasoned, experienced conspiracy theorist would float this explanation, because if true, it would be far too obvious to get away with. The reason JFK’s assassination is still shrouded in mystery is because as implausible as the official story seems, there isn’t a crystal clear alternative explanation for it either. Trump being diagnosed with the virus in early October and “cured” a few days later by a new “miracle treatment” would be as transparent as a sign outside Area 51 that reads “Keep Out: No Aliens Here.”

Trump’s Base Can Also Be Depressed

Liberals will tell you that they’re driven by their commitment to equality, fairness, and justice, but in reality, their greatest passion is asserting their moral and intellectual superiority over supporters of Donald Trump. How many times have you heard them proclaim “They’ll believe anything he says!” with a certain misplaced glee in their voice? Their words signal lament and disgust, but their physical and tonal expression seems oddly upbeat. This is because they get tremendous fulfillment out of ridiculing the intelligence of their political opponents, branding them as mindless lemmings who would follow Trump wherever he leads them.

Ironically, however, much of Trump’s base flocked to him in the first place precisely because they saw in him a fellow skeptic of status quo politics. Trump ran an unapologetically anti-establishment campaign in 2016 and attracted the support of notable conspiracy theorists like Alex Jones, and even now, a majority of Republicans believe that the QAnon conspiracy theory is “partly or mostly true.” Despite the liberal class’ smug dismissal of MAGA-world as a total brain drain, Trump’s base, in reality, is a tougher nut to crack. Yes, they’re loyal to their dear leader. Yes, they often sound like complete imbeciles. But they’re also fiercely skeptical of certain establishment narratives, which means they do have functioning eyes, ears, and brain cells; they might not function as Rachel Maddow wishes they had, but they do actually work.

Therefore, much like any other politician’s base, Trump supporters can be enthused by certain events, and depressed by certain events. Trump’s aversion to mask wearing, flaunting of social distancing guidelines, and subsequent contraction of and hospitalization for coronavirus, will be a gut check for his base, and will depress turnout next month. Once again, the irony here is that to accept this idea is to ascribe a certain humanity to Trump’s supporters that most liberals are unwilling to acknowledge. But I can assure you, as someone who lives in a purple county and has personal relationships with dozens of Trump voters, most of them are actually human, they are capable of processing information, and they are processing this information much in the same way you are.

The Debates are a Non-Starter

Trump’s campaign had been banking on impressive debate performances in which he would appear a strong, confident executive, and Joe Biden would expose himself as a doddering old fool incapable of leading the country. At the first debate, Trump overplayed his hand by interrupting both Joe Biden and moderator Chris Wallace an absurd 128 times, not even affording Biden the opportunity to go off on one of his infamous “Corn Pop” or “Record Player” tangents, squandering what could have been his last chance to prosecute a convincing case against his opponent. With Trump’s health in flux, it remains an open question whether or not there will be any more debates, and given the overwhelmingly negative response to the first debate, it’s even more doubtful that a large number of viewers would return to watch a potential round two and three.

Time for a Real “Resistance”

As many of our regular readers may have noticed, this article is a bit off-brand for us. Personally, I’ve felt from day one of this campaign, way back in late 2018 when the first Democrats were declaring their candidacies, that Trump was the favorite to win this election. The fundamentals of the race were all in his favor: a (supposedly) strong economy, a crisis-free America, a dominant Electoral College position, and a weak and fractured opposition party. Even after the coronavirus pandemic began and persisted throughout the year, which no doubt changed the game dramatically, I still felt Trump had a strong chance, given his enormous enthusiasm advantage and Joe Biden’s abysmal numbers with key Democratic voting blocks. And yes, even after Trump’s epic swing-and-a-miss debate performance, I remained hesitant to project a Biden victory, thinking it still possible that Trump’s base could carry him over the finish line in key swing states.

But throughout this campaign, Trump’s strength was…well…his strength. He consistently doubled down on the promise that the virus would be swiftly and handily defeated, and there was always a chance that such an optimistic message would prevail – until now. Because he got the virus. The bottom has fallen out of his campaign, and, barring some extremely unlikely event (I know, a precarious hedge in a year like this one), he is going to lose in November.

So what does this mean? Well, it means it’s time for a real resistance. The Left will have to start organizing as soon as possible to disrupt the Biden administration and make our presence felt in a post-Trump America. We’ll get to see what the Squad is really made of: will they be the thorn in the side of the Democratic establishment they say they are, or will they acquiesce to power the way so many of their lefty forebearers have in years past? Will there be strikes, marches, and other direct action campaigns to demand universal healthcare, climate action, police reform, and debt forgiveness, or will there be a “return to normalcy?” Will the Biden administration pack the Supreme Court, or will the judiciary have permanent veto power over any and all progressive legislation for decades to come?

The answers to these questions depend entirely on us. Joe Biden is an enemy of the Left, and an enemy of the types of reforms we know are desperately needed. He’s an enemy of racial justice, environmental justice, and economic justice. He has been his whole career. That won’t change, no matter what we do. I’m not going to perpetuate any delusions about “moving him left” or “holding him accountable.” He’s ultimately a company man, and he was enlisted by the party bosses specifically to stop a progressive takeover of the institution that has served him so well since he was first elected to the U.S. Senate in 1972. We can’t “move him” anywhere. But we can apply as much pressure as possible to the system itself, until, just maybe, it is forced to bend to our will. Again, the ball is in our court.

But this week’s events should cease the tiresome punditry and bloviating about whether to vote, how to vote, in a swing state, in a blue state, etc.. This election looks like a done deal, for better or worse. So wear your mask, vote your conscience, and prepare to give the Biden administration a real resistance in 2021.

3 thoughts on “Trump Has Covid. He Can’t Spin it to His Advantage. He Will Lose the Election.”