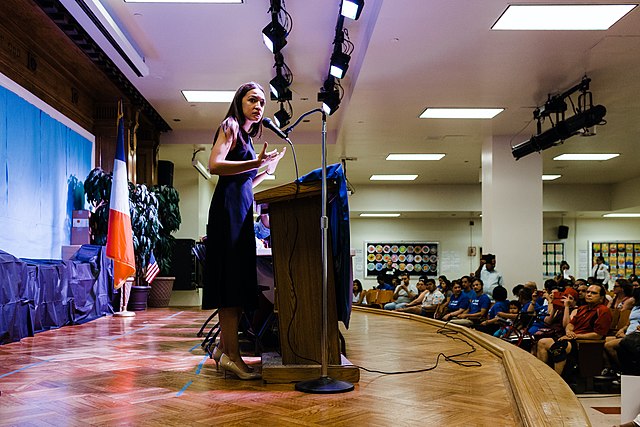 You Don’t Change the Party, the Party Changes You: AOC’s Iron Dome Vote Proves This Point

Whether to DemExit or to primary centrist Democrats and elect progressives within the party has been a contentious debate in Left circles since the 2016 election. Those in the latter camp argue that the party can be reformed from within if enough insurgent candidates can successfully defeat incumbent moderates. A common retort among the former is some version of the phrase, “You don’t change the Democratic Party, the Democratic Party changes you.”

Those words loom large this week, as on Thursday evening, Alexandria Ocasio- Cortez switched her vote on the funding of Israel’s “Iron Dome” from ‘no’ to ‘present’ just moments before the tally was finalized. Fellow Squad members Ilhan Omar, Rashida Tlaib, Ayanna Pressley, and Cori Bush, were among only 9 representatives who voted against the $1 billion investment in Israeli’s military defense.

Among the possible explanations for AOC’s last minute change of heart is that she is considering mounting a primary challenge against Chuck Schumer for his Senate seat in 2022, and that were she to be perceived as anti-Israel, it would sink her chances. There’s also some speculation that her district will be redrawn to include Riverdale, a section of the Bronx with a sizable Jewish population.

Whether these political conundrums occurred to her just in time to change her vote, and whether or not they factored into her decision, are unknowable unless she herself offers her own explanation (she was also spotted exchanging words with Nancy Pelosi shortly before the vote). In any case, it’s fairly obvious that she wanted to vote ‘no,’ but ultimately lacked the conviction to do so, and that this was a purely political decision and not a moral one.

Of course, the #FraudSquad contingent of the online Left will have a field day with this, as they’ll point to yet another instance of AOC waffling on issues of importance to her progressive base (another recent example was her ‘present’ vote on $2 billion of Capitol Police funding).

And while it’s easy to sympathize with their disgust, we should also see this as a profoundly sad story. Reportedly, AOC had to be consoled by her colleagues on the House floor, as she seemed to have broken down in tears in the moments before and after the vote.

Perhaps she cried because she finally realized that the pressures of Washington had actually changed her. Once a renegade firebrand set to spearhead the progressive takeover of the Democratic Party, she now found herself having to break from her fellow Squad members and betray her values for purposes of protecting her own power. At just 31 years old, less than a year into her sophomore term, she had already compromised her principles in such an obvious way on an issue of particular importance, not only to her, but to her closest allies in Congress as well. Rashida Tlaib, the United States’ first Palestinian Congressperson and friend of AOC, gave a powerful floor speech against the funding bill, denouncing the Israeli government as an “apartheid regime.”

Parting with her most trusted and esteemed colleagues, especially on a matter as personal to them as this one, could not have been easy for her, which much better explains her emotional reaction than that her tears were somehow fake, as has been alleged by some in both Right and Left wing media circles.

Let’s not forget that in the wake of the 2020 election, when progressives were being blamed for Democrats’ House losses, AOC gave an interview to The New York Times in which she openly floated the possibility of quitting politics altogether. She lamented that Washington was “extremely hostile to anything that even smells progressive,” and said that “the odds of me running for higher office and the odds of me just going off trying to start a homestead somewhere — they’re probably the same.”

This is one of many examples when AOC has spoken publicly about the challenges of overcoming institutional and political pressures as a progressive Congresswoman.

We should also recall her statement in the aftermath of her 2018 victory in which she expressed a willingness to buck the system to the point where it might cost her her seat. In a video for Justice Democrats released in January of 2019, she proclaimed, “If you’re a one-term Congress member, so what? You can make 10 years’ worth of change in one term if you’re not afraid.”

Unfortunately, it seems now that she is afraid – afraid of party leadership, afraid of her own electorate, and afraid of what the future has in store for her as a politician.

And so rather than bludgeon her with #FraudSquad hashtags and accusations that she’s “sold out” her base, I think we ought to encourage her to ask herself that very same question: if you’re a one-term Congress member, so what?

Is she cut out for this, or would she be of greater service in some other capacity (we know from her previous quotes that she’s asked herself this same question from time to time)? She’s a giant star at this point who undoubtedly has a plethora of options in terms of how she can best influence the world she hopes to change. Is Congress the best place for her to do that, or is it not? She needs to revisit this question. Because right now, it seems she’s on the all-too-familiar path of young starry-eyed idealists who think they can change the system, only to find years later that the system has changed them.

At this rate, it won’t be too long before she sounds just like Nancy Pelosi did in her September 2019 interview, where she said, regarding progressives’ push for Medicare For All, “All of these issues – single payer and all that – I have those signs in my basement from 30 years ago.”

Will AOC be singing that same tune sooner than later? It sure looks that way. But as a young woman with a massive following and bona fide celebrity status, there’s no need for her to resign herself to such a depressing fate. Perhaps she should quit, as she suggested she might last year, and try to affect change from outside the system.

At the very least, she needs to rediscover her cavalier spirit as an activist who’s not afraid to lose an election or upset party brass. Because by casting such a blatantly hypocritical vote as this one, she’s betrayed the very coalition that propelled her to power in the first place – something for which she instantly felt remorse the moment she did it. She doesn’t have to do this anymore; the decision is hers to make.