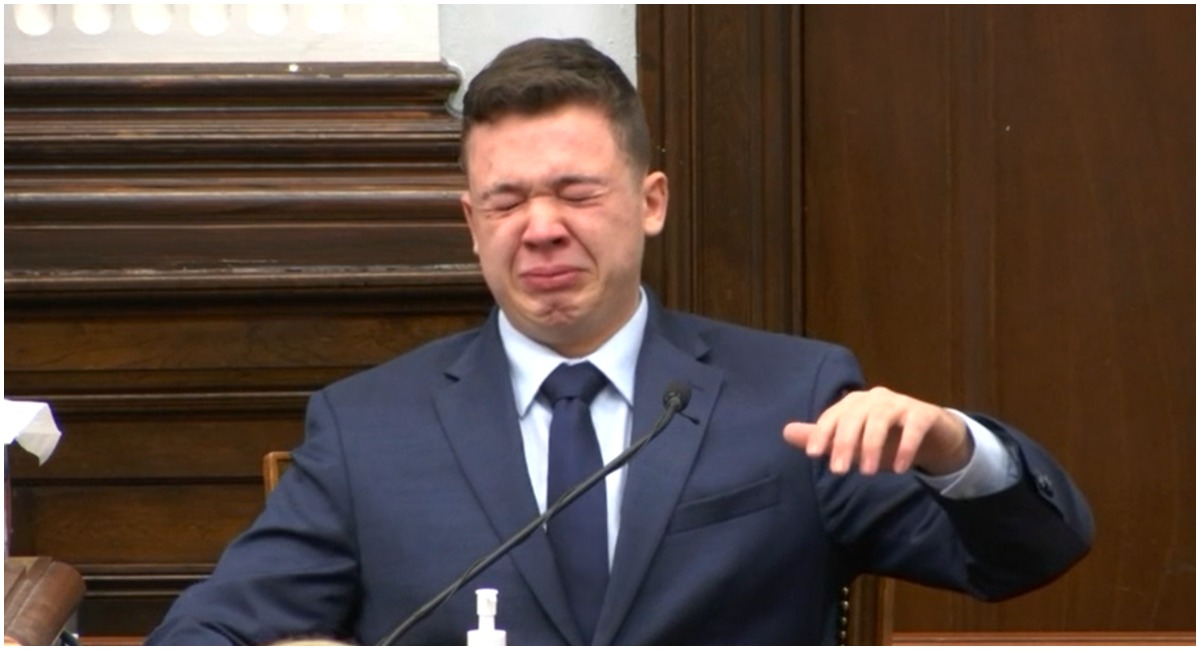 Kyle Rittenhouse’s homicide trial is the latest in a continuing series of high profile court proceedings to be televised for all to see. Yesterday, Rittenhouse burst into tears when recounting the events leading up to the moment he shot three men, killing two.

His outburst quickly went viral online. Those on the Right rushed to his defense:

And of course, the Left’s response was far less charitable. Many accused Rittenhouse of faking his tears altogether, and expressed their feelings for him in rather uncompromising language:

Perhaps nothing symbolizes how this case has enflamed the already raging culture wars more than how both political camps drew parallels between the Rittenhouse trial and the infamous Brett Kavanaugh confirmation hearings of 2018:

The Right and Left’s predictably disparate reactions to this incident are among the latest and most palpable examples of our deteriorating social fabric. When the whole country can watch the same tape and respond this differently, it certainly creates the impression that the gulf between us is irreconcilable.

To make matters worse, both sides seem oblivious to this broader dynamic, as both are too staunchly committed to their respective positions to realize the hopelessness of the larger situation. They’re too close to the particulars to realize the tragic arc of the overall timeline; too convinced of their own righteousness to reckon with the fact that the war they’re fighting is unwinnable, because the society they’re fighting for is unsalvageable.

Televising the trial of Kyle Rittenhouse only exacerbates this problem. It draws everyone’s attention to one person, which serves to exonerate the real culprit in this story: the system as a whole.

To even express an opinion on Kyle Rittenhouse himself is to miss the forest for the trees. Whatever Rittenhouse may or may not be – to the Left, a murderous white supremacist vigilante, or, to the Right, a noble defender of law and order – we know for sure that he was just a 17-year-old kid at the time of the killing in question.

As emotionally satisfying as it may be for some to liken Kyle Rittenhouse to Brett Kavanaugh, this is of course a ludicrous comparison. Kavanaugh is arguably one of the 100 most powerful people on earth, an architect of the status quo that produces thousands of angry young boys like Kyle Rittenhouse, who are simply byproducts of a decaying social infrastructure. It’s no surprise that such a distinction would be lost on a movement of critical race theory proponents who see Kavanaugh and Rittenhouse as indistinguishable because they share a particular skin color. In a world where all whites are oppressors and non-whites victims, Brett Kavanaugh and Kyle Rittenhouse are the same. This is a world in which all other power imbalances are glossed over, such as the glaringly obvious one between a Supreme Court Justice and a brainwashed adolescent.

Here in reality, Kyle Rittenhouse is nothing more than a pawn in the game. He’s a moving part, a cog in the machine built by the likes of Kavanaugh and other elite actors. He’s today’s fall guy for the same rotten system that produced Derek Chauvin, whose guilty verdict was a source of much rejoice on the Left just a few months back.

Both the Chauvin trial, and now the Rittenhouse trial, give people the mistaken impression that to bring these men “to justice” is itself significant progress in the struggle to ameliorate the social ills that created them in the first place. If anything, the obsession with Chauvin and Rittenhouse as individuals only provides cover for the malevolent social circumstances out of which they arose. To celebrate their comeuppance is to revel in the same spirit of vengeance and retribution that undergirds our entire system of “criminal justice,” one that has victimized generations of black men using the exact same pretexts.

Instead, this justified anger is better directed at the structures and institutions that allowed for the killing of George Floyd. Of course, such systemic critiques are outside the bounds of what the establishment considers acceptable. This is why the corporate media was happy to serve up Derek Chauvin on a platter, but balks at any suggestion of defunding the police.

They’ll allow you your Two Minutes Hate against the villains du jour, but direct that same indignation at the machinery that spat them out, and you’ll quickly find yourself on the wrong side of the same media apparatus that riled you up about Chauvin, Rittenhouse, and whoever the next hapless stooge happens to be.

And so, the trial of Kyle Rittenhouse is just another symptom of a nation in decline and a society coming apart at the seams. Its warring factions are both too enraged to notice that the society over which they’re fighting has already been lost, and its architects will never legitimize any serious attempt to course correct.

All we’re left with are back-and-forth deliberations over individual people with little to no power, and heated debates about their “privilege” and how to hold them “accountable.”

However accountable Kyle Rittenhouse is for his actions, it’s apparent to any clear-eyed observer that our system of brutal capitalism enforced by militarized policing is the guiltiest party in all of this. As long as this societal arrangement is unchangeable through democratic means, none of these judgments for or against individual actors like Chauvin and Rittenhouse will make much difference. Instead, what appears as two opposing sides in a struggle for the future of the country is really just the collective and cacophonous dying scream of a doomed American experiment.