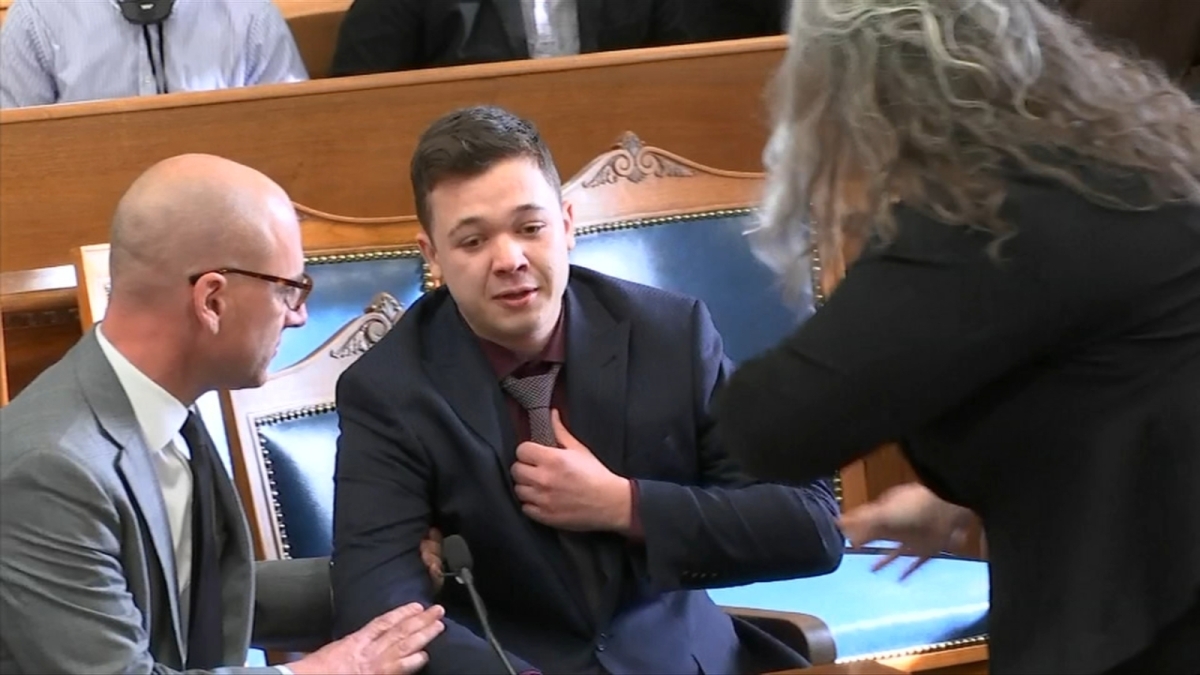 The verdict was met with predictable backlash from the Left, who are calling the trial a disgraceful miscarriage of justice, and another victory for the white supremacist Right. To them, this was more than a trial – it was a proxy for a larger political struggle in which privileged white men seem to win all too often. They rightfully point out that were the shoe on the other foot, and Rittenhouse was a black man showing up armed to a MAGA rally and killed two people, he’d have likely not lived to have his day in court.

The problem with this analysis is not that their assessment of the prevailing social dynamics or the aforementioned hypothetical result of an alternate scenario is wrong, but that such opinions cannot be relevant to the outcome of an individual’s criminal trial.

In a murder trial, only one thing matters: the guilt or innocence of the defendant based upon the law and the evidence. Period. A guilty verdict – the consequence of which is at least a decades-long prison sentence, at most, life in jail or execution – can only be rendered if the evidence proves the defendant’s criminality beyond a reasonable doubt.

In this case, it’s clear based on all the evidence that Rittenhouse acted in self-defense. The first person he killed, Joseph Rosenbaum, had been starting a fire earlier that evening. When confronted over it, according to trial testimony, he said within earshot of Rittenhouse, “If I catch any of you guys alone tonight I’m going to fucking kill you.”

Later on, video clearly shows Rosenbaum chasing Rittenhouse through a parking lot, and Rittenhouse is seen running away. Only after Rosenbaum catches up to him and reaches for him does Rittenhouse open fire.

After this first violent incident, Rittenhouse ran towards the police, and was followed by a group who had seen the shooting and sought to disarm him themselves. This is when Aaron Huber and Gaige Grosskreutz attacked Rittenhouse, knocking him over. Huber struck him with his skateboard. Rittenhouse shot him, fatally wounding him. Grosskreutz then stopped and put his hands up. Rittenhouse held his fire. Grosskreutz then, gun in hand, lunged towards Rittenhouse, who fired one shot into his arm, injuring him (this is all captured on video, which can be seen by clicking here, viewer discretion is advised).

No one who has seen the video and even nominally followed the trial has disputed that Rittenhouse was indeed attacked by aggressors who he then shot. Therefore, the essential thrust of the argument that those who wanted a conviction are making is that Rittenhouse went to Kenosha that night looking for trouble, and that the very act of bringing an AR-15 into that situation was itself a reckless provocation, and a de facto forfeiture of any legitimate claim to self defense.

This assertion that Rittenhouse sought to provoke violent confrontation that evening is the linchpin of the argument for his conviction. This is where the case becomes much more complicated than many making this argument want to recognize.

First, I should say that personally, I feel that bringing an automatic weapon to a riot should be illegal, and should be itself considered an act of reckless endangerment. Were these laws on the books, Rittenhouse’s claim to self defense would be much less valid. In that case, it would be written in law that whether of not he felt he was there that night to do good and keep the peace, the society had, through the democratic process, deemed that his actions were inherently dangerous and destructive. Bringing his weapon to the protest, in that case, would have been a conscious act of defiance against such a consensus.

Unfortunately, the situation I just outlined does not accurately describe the circumstances under which these tragic events unfolded. There are no such laws stating it is illegal to patrol the streets with an AR-15 during a riot. In fact, as we all know, half the country idolizes this kind of vigilantism, and insists upon every individual’s right, and perhaps even an obligation, to defend themselves using force if necessary.

And so, given this lack of legal precedent and the social and political realities of the times, it then becomes necessary to prove – beyond a reasonable doubt – that Rittenhouse sought out violent confrontations in Kenosha that night, so much so that even if he didn’t technically initiate the conflict (which, again, video evidence shows he didn’t), he could still be blamed for igniting it.

This is a nearly impossible case to make. It’s made especially difficult by the fact that despite the corporate media’s insistence that he had no ties to Kenosha and that he “crossed state lines” specifically to go there and find trouble, that he lived just across the Illinois border, his father lived in Kenosha, and he had worked there in the past. The presumption that he had nefarious motives from the outset is further contradicted by photo evidence showing him cleaning graffiti off a school earlier that day, and video footage reviewed by The New York Times of him offering medical assistance to protestors.

Given the abundance of evidence that contradicts the condemnation of Rittenhouse as a hotheaded angry white supremacist looking to hunt down Black Lives Matter protestors, it is not reasonable to expect a conviction from a jury legally obliged to acquit unless they can honestly determine guilt beyond a reasonable doubt.

Assumptions about Rittenhouse’s politics, value judgments about his privilege as a white person, and indignation about how marginalized groups – people of color, battered spouses, Muslims, immigrants – are rarely given the same benefit of the doubt when they act violently in self defense, are all valid thoughts and feelings. But none of them have anything to do with the only pertinent question material to the case, which is, once again, based on the law and the evidence, is Kyle Rittenhouse guilty or not?

Harvard law professor Thomas Reid Powell is known for the quote, “If you can think about something that is related to something else without thinking about the thing to which it is related, then you have a legal mind.” This applies perfectly to evaluating the Rittenhouse verdict. Of course, negative feelings about who Rittenhouse is and the sociopolitical forces he represents are perfectly valid. That such feelings would influence one’s attitudes about the outcome of his trial is a natural and understandable impulse. However, a core principle of our legal system is that such opinions must be held in check when determining his guilt or innocence based on the evidence and facts of the case.

It is simply impossible to maintain a functioning judicial system in a pluralistic society without adhering to this principle. Perhaps a more accessible quote describing a similar dynamic is a lyric by the great Leftist songwriter Billy Bragg that goes, “This isn’t a court of justice, son. This is a court of law.”

Struggles for political and social justice exist in the streets and, theoretically at least, at the ballot box. The courts are a separate branch of government precisely because they are meant to uphold and enforce the law, not to shape them in the image of political actors. Yes, in a sane society, there would have been laws on the books prohibiting Kyle Rittenhouse from showing up armed to the gills in Kenosha that night. In such a society, he would be guilty of reckless endangerment the second he stepped onto the scene, and likely would have been apprehended by police before anyone got hurt. This is the society that, in my view, we should all strive to create. But that isn’t the society in which we currently live.

The society in which we currently live is one embedded with wild west vigilantism and frontier paranoia, where use of force in self defense is celebrated, if not outright romanticized as “heroic masculinity.” These unfortunate social dynamics were certainly at work on August 25, 2020, and anger and frustration about how they affected the events of that night are completely justified.

But once again, a jury is legally and constitutionally bound to prevent such emotions from affecting their verdict in a murder trial. All that matters in such an arena is the defendant’s guilt or innocence based on current law and existing evidence, not based on what they feel a just society might look like, and what their verdict would be under those hypothetical circumstances. Based on the appropriate criteria, guilt beyond a reasonable doubt was impossible to establish in this case, and so the jury made the correct decision in acquitting Kyle Rittenhouse.

We discuss the trial and the verdict in further detail in episode 127 of the Due Dissidence podcast. Click the player below to hear our full conversation, and Subscribe to our podcast and listen on Apple, Stitcher, Spotify, Castbox, Google Podcasts, or any major podcast player.